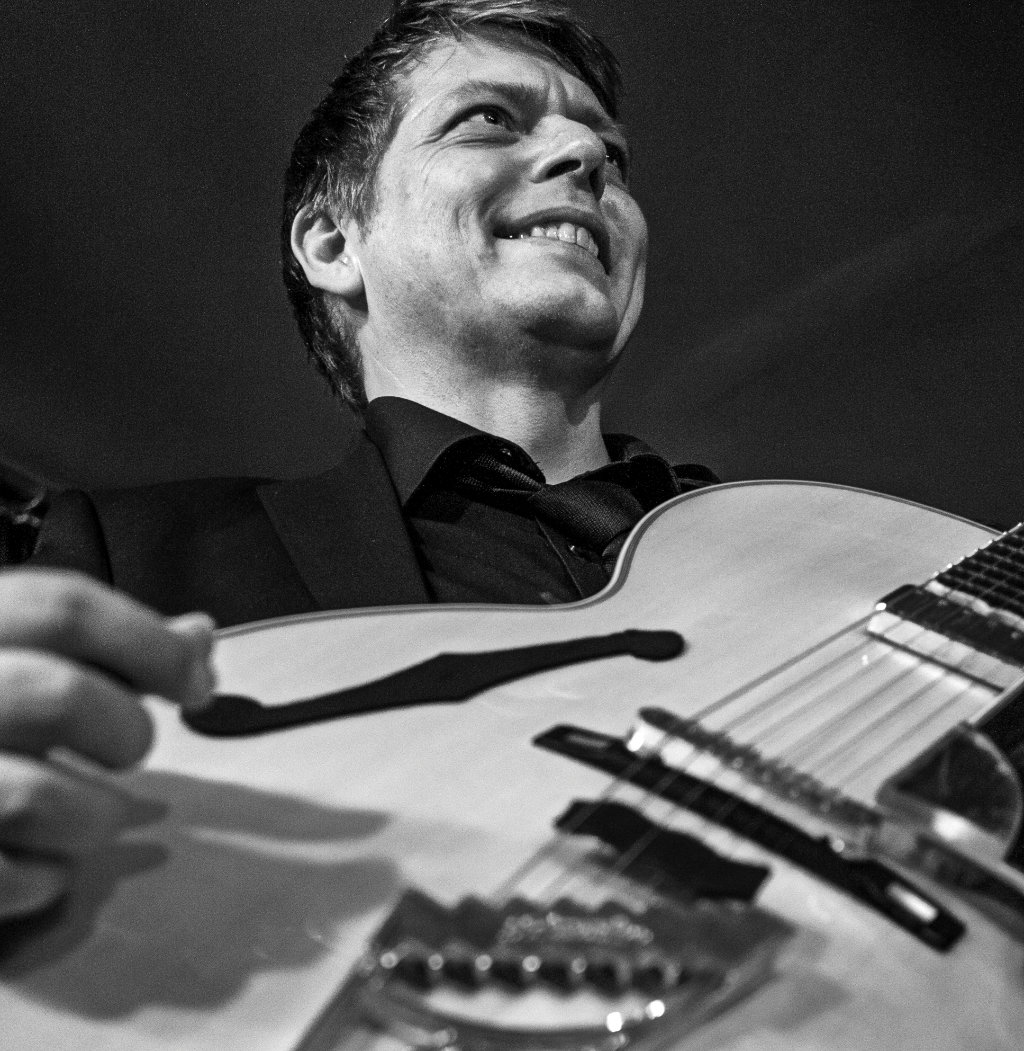 Over a career spanning more than 25 years, award winning jazz guitarist Nigel Price has become widely acknowledged as one of the hardest working musicians in the business.

Musically, his blend of flowing bebop lines, deep blues sensibility and his mastery of chording continue to delight audiences and fellow musicians alike. His career highlights include a support show for Gladys Knight at The Royal Albert Hall and an appearance on Van Morrison’s recent album Keep Me Singing.

Starting his professional career in his early 20s, Nigel toured Europe with various reggae and funk bands before settling on a solo guitar career and turning his attention to jazz. Citing early influences as Wes Montgomery, Joe Pass, John McLaughlin and the Mahavishnu Orchestra, Nigel honed his craft by attending gigs and sitting in with the players of the time.

Nigel has played on more than 50 albums including 5 as a leader, spent ten years with acid jazz outfit The Filthy Six, was a member of James Taylor’s band for 3 years (with whom he recorded 5 albums) and performed with the legendary David Axelrod. He has also taught at The International Guitar Foundation at King’s Place, London.

Nigel is a regular performer at London’s Ronnie Scott’s Jazz Club where he has made more than 500 appearances. He released his fifth Organ Trio Album Heads & Tales Volume 2 in late 2016 to great critical acclaim and has performed lengthy UK tours ever since.

Robin Aspland is a highly respected pianist who makes his first appearance at the Isle of Wight Jazz Weekend. Through the 1990s, Aspland became very well known in UK jazz circles, playing with resident and visiting artists such as Iain Ballamy, George Coleman, John Dankworth and Cleo Laine, Pete King, Dick Morrissey, Orphy Robinson, Arturo Sandoval, Ronnie Scott, Bobby Watson, Kenny Wheeler and Van Morrison, spending about six years touring with the latter. Through into the early 00s, Aspland continued to build a reputation as an excellent and inventive soloist. He is also known and respected as a gifted sideman and is especially adept as an accompanist to vocalists, among who are Liz Fletcher, Karen Lane, Claire Martin, Curtis Stigers, Anita Wardell, and actress Jane Horrocks on her 2000 album, The Further Adventures Of Little Voice. Among other artists with whom he has played and recorded are Roger Beaujolais, Alec Dankworth, Nigel Hancock, Ed Motta, Jim Mullen, Dave O’Higgins.

Dario Di Lecce moved to London in 2012 and quickly became one of London’s ‘most in demand’ bass players. Heavily influenced by his hard bop heroes such as Joe Henderson and Jackie McLean, he started his career playing with renowned musicians in Italy. He has performed in France, Holland, Slovenia, Germany, Czech Republic and the United States, sharing the stage with jazz masters such as George Garzone, Eric Ineke and Roberto Gatto to name a few. He is in constant demand as a sideman and has played for artists such as Grant Stewart, Michael Kanan, Steve Fishwick and Stacey Kent.

Steve Brown is one of the most recognisable and popular jazz drummers in the UK and has been in constant demand as a subtle and swinging accompanist ever since the late 1990’s when he moved from Manchester to London.