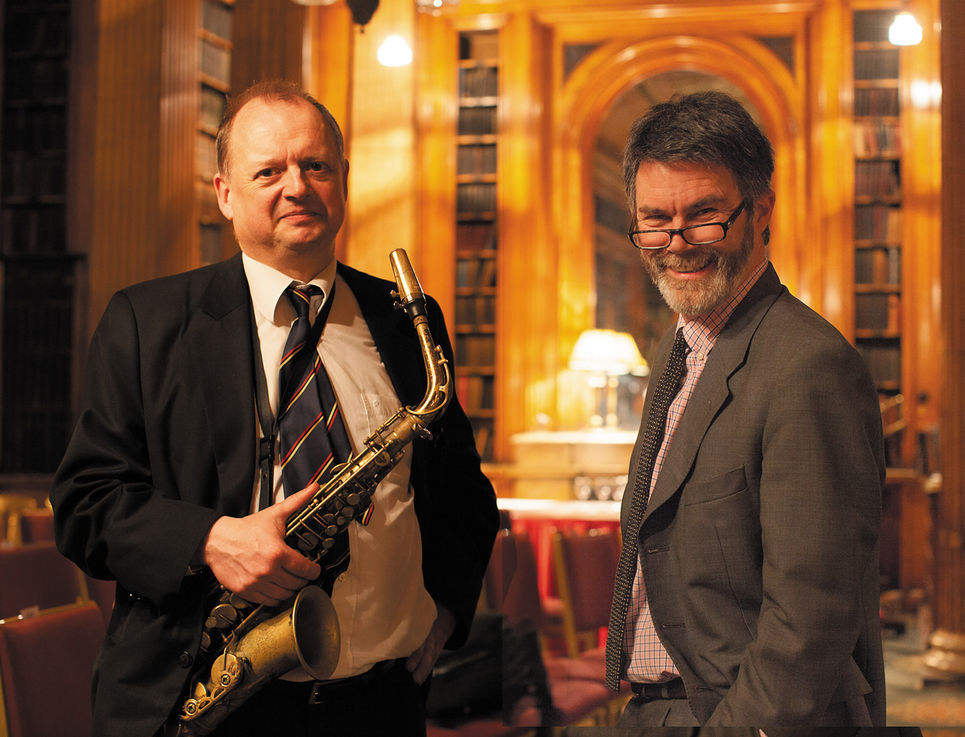 Dave Newton (piano) and Alan Barnes (alto and baritone saxophone) are two of the most popular and respected jazz musicians in the UK. We could think of no better way to start the first ever Isle of Wight Jazz Weekend spot outside Newport!

Alan Barnes and David Newton have been playing duets together for over 40 years. These multi award-winners cover a vast repertoire from Louis Armstrong to Chick Corea and play with an empathy that can only come with long experience. The emphasis, as always, is on swinging, accessibility and interplay. Expect a hugely entertaining programme of straight ahead jazz flawlessly played and interspersed with lots of anecdotes.

Growing up in Renfrewshire, Scotland, Newton had a musical upbringing with the piano trio sound of Peterson, Tatum or Garner an ever-present feature in the Newton household. After graduating from Leeds College of Music in 1979 David Newton freelanced around Yorkshire and eventually became a resident musician at the Stephen Joseph Theatre in Scarborough for two and a half years. A move to Edinburgh followed where theatre work using local musicians quickly led to an established position on the Scottish jazz scene but after some four years there, his old roommate from college, Alan Barnes, persuaded him to move to London where he rapidly became a much sought after pianist teaming up with Barnes, guitarist Martin Taylor and saxophonist Don Weller.

Newton's recording career had begun in 1985 with Buddy De Franco and Martin Taylor and his first solo album was released in '88 in association with producer Elliot Meadow who oversaw the next nine years of recording for Linn Records followed by Candid Records. Once again, in 1997, David Newton and Alan Barnes teamed up and together with Concorde Label agent Barry Hatcher, made four CDs for that label. By 2003, Newton had learned a great deal of the ways a record company operated and he set up a business partnership with former pupil Mike Daymond and they established "Brightnewday Records" initially as a vehicle for Newton's own music but with an eye to opening up the catalogue to other artists later on.

In the first five years of the nineties, Newton's reputation as an exquisite accompanist for a singer, spread rather rapidly and by '95 he was regularly working with Carol Kidd, Marion Montgomery, Tina May, Annie Ross, Claire Martin and of course Stacey Kent, with whom he spent the next ten years recording and travelling all over the world. While all this was going on, Newton was composing music which he would record on his own CDs as well as writing specifically for Martin Taylor, Alan Barnes, Tina May or Claire Martin. Both David and Alan are perennial winners of the British Jazz Awards on their respective instruments. Alan Barnes is a prolific international performer, composer, arranger, bandleader and touring soloist. He is best known for his work on clarinet, alto and baritone sax, where he combines a formidable virtuosity with a musical expression and collaborative spirit that have few peers. His range and brilliance have made him a “first call” for studio and live work since his precocious arrival on the scene more than thirty years ago.His recorded catalogue is immense. He has made over thirty albums as leader and co-leader alone, and the list of his session and side-man work includes Bjork, Bryan Ferry, Michel LeGrande, Clare Teale, Westlife, Jools Holland and Jamie Cullum. He has toured and played residencies with such figures as Ruby Braff, and Freddie Hubbard.